How Rugby Found a Home in the Cowichan Valley

There is ample evidence that certain sports were played on Vancouver Island well before WW1. The JBAA, was founded in 1886, and had to play someone.

Rugby, field hockey, rowing, cricket field polo, horse riding and sailing flourished. These sports were part of the imperial experience around the world. They were introduced by naval personnel on bases such as Esquimalt, or by retired Indian Army officers who came to the Cowichan Valley. They were then bolstered by record immigration in 1911. George Whittaker remembered the “gentlemen” playing polo in one of his pastures. The Cowichan Cricket and Sports Club certainly ran a rugby team in the twenties. Rowing also appears at and before 1911. That year Pocock, the famous boat builder, made two coxless fours for the Shawnigan Lake Sports Club. This is significant in the view of the present cooperation between these two organizations.

The founding of the Cowichan Rugby Football Club in 1962 was not the beginning, but the revival of a dormant game.

George Whittaker, long since deceased, told me of playing in the twenties, packing down in the scrum and continually chafing his shoulder on the backside of the front row player. It turned out that was where his teammate kept his false teeth! The origin of the name “rugby football” is found in the eventual divergence of the two sports groups previously grouped in unruly games of “foot-the-ball” up to the mid-19 th century. As rules emerged “association football”, or soccer, became quite different from “rugby football”. That’s my story, anyway.

The following outlines the physical emergence of the club from the tangled web, post-1962. It does not deal with personalities because of the risk of omission. As a group of individuals, the club has its humourists, rogues, politicians, blackguards, far-sighted, short-sighted, penurious and wealthy, industrious and ambitious, and layabouts.

In other words, a good cross-section of Canadian society. They all contribute in their unique ways to the good of the club.

At first, there was the idea. No field, no clubhouse, no changing rooms. Fixtures were arranged and a field was found for the occasion. The club was the team on the field on that particular day. When the game ended and the beer was consumed, the club vanished. After a while, one member and his wife offered their home for the after-game “tea parties”. This gave the club some continuity and was greatly appreciated. There came a time, however, when the next step had to be taken: a permanent, independent location.

The first venture is referred to as the “troika” era and consisted of an association between the Cowichan Rugby Football Club and the South Cowichan Lawn Tennis Club.

This would seem unthinkable, but at the time, there were members who belonged to both clubs and it looked workable. However, it was roughly equivalent to joining Orthodox Serbia with Muslim Bosnia-Herzegovina. The third member of this unholy trinity was the Cowichan Cricket Club, which had sold its ground to the City of Duncan and was looking at developing a wicket on property adjacent to the tennis club.

Flooding of the Cowichan River covered the ground with gravel after levelling and seeding had taken place. Cricket was unhappy and tennis and rugby were incompatible; unmentionable things took place on the hallowed grass courts. The sign that whites only were to be worn on the courts was respected but it is certain that underclothes were not acceptable either.

Out at the cricket club property on Wharncliffe Road, the city developed what became McAdam Park, with decent changing rooms and hot water showers. The rugby club had the use of this facility and many fine teams played there, including the French club champions of the day, Beziers. Gradually, however, the use of this facility became congested. It is a public park and sports such as football and soccer had equal rights. Furthermore, when it rained the city parks manager tended to shut down the field. Rugby began to get heat for the damage to the pitch although it was demonstrated that soccer also helped to produce that rather brown, battered appearance disapproved of by groundsmen.

The club wanted somewhere to call its own, unbothered by partners or bureaucrats, where rugby could be played in any weather and only the members would be responsible for the grounds. After surveying the whole Cowichan/Chemainus area, the Herd Road site seemed the most affordable. Our only means was the equity in the changing rooms we had built at the tennis club; we settled this matter with tennis for $10,000.

As it turned out, we were not entirely free of bureaucrats since this land is in the Agricultural Land Reserve. This brought the club into some conflict later on, which has since been resolved. Our immediate problem was to turn a piece of rough pasture, subject to flooding, into playing fields. Working on a shoestring budget and heavy mortgage, with the help of all members and a provincial grant, playing areas of minimum size and narrow in-goals were graded out. The Land Commission had given permission to build changing rooms but “How?” was the question. This was 1979 and by sheer chance, the Gaming Commission had some lottery money available and responded to an appeal.

Money was the least of our problems – we found that we had bought a property that floated on subterranean water.

Excavating for the foundations turned into an exercise in dredging. It was decided to dig deep and fill the excavation, to grade, with gravel; so the seasonal level of water rises and falls under the changing rooms with no one the wiser. 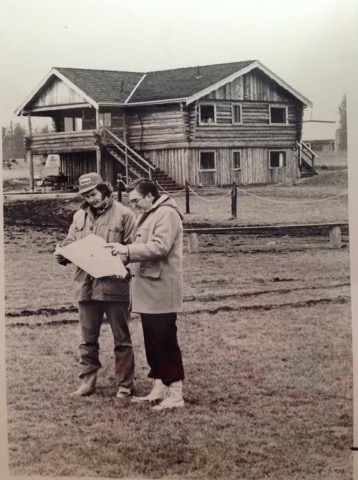 The club soldiered on with a clubhouse, fields and changing rooms. It was clear that if we ever wanted top-level games we had to have a full-size field. This would mean a new layout and we also wanted an all-weather field. By 1987 the work began with an estimated budget of $150,000. This was made up of volunteer layout, donations, bingo receipts and grants. The memorable event was the laying of the turf over the entire playing/practice area (about 5.5 acres) previously covered with 24 inches of sand and drainage pipe. All club members and their children took part as loads of turf had to be laid before drying out.

Within a year or two, fund-raising started for the grandstand and its approaching sidewalk. Started in 1991, it was costed out at $128,000; this included drainage for the parking lot. The provincial grant was one-third, about $43,000. The club had to complete the project before receiving a penny of the grant. We adopted some unusual fundraising schemes; selling tickets to the MacPherson Theatre, running bingo at the Duncan Dabbers Hall; organizing casino nights; all these projects brought in the necessary cash for materials but the bulk of our funding came from the volunteer labour of our club members. On February 16, 1992, the grandstand was officially commissioned.

The visitor will notice the handsomely equipped play area for children just beside the pathway to the grandstand. It is an appropriate reminder that Cowichan is a family club and that many current players grew up accompanying their dads to practice years ago. There were early attempts at a playground but it took the wives to organize three gala dinners, raise $15,000, contract some work and get donated labour and materials for the rest.

Some husbands were involved in the gala dinners for fund-raising but there is no mention of the persuasive methods used!

The women are assuming many roles on the executive and, of course, we celebrated the creation of a Women’s XV this season. As for the children-we shall soon have third-generation players.

Looking back over forty years it is hard to grasp how much we accomplished starting with virtually nothing; all this, as well as receiving incoming tours, meeting our game commitments, promoting the game at school level and achieving an enviable standard of rugby on the island. It has been done with thanks to our members and those non-members who have supported us without question. A magnificent achievement and contribution to the community of the Cowichan Valley.