Mill Bay products have come a long way together 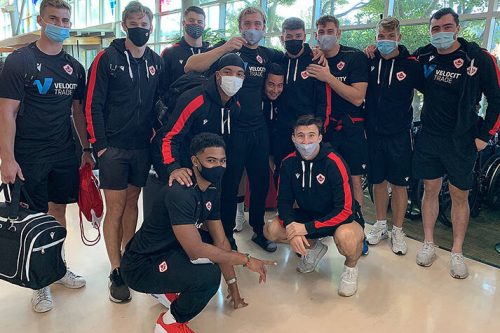 It wasn’t lost on Ciaran Breen and Matt Percillier how far they have come together when they made their debuts with the national men’s rugby sevens team in international tournaments over the last two weekends.

“There was one pass I made to Matt against Kenya,” Breen recalled shortly after the team returned to Victoria from Edmonton this week. “It was surreal: you go from passing to this guy at 13 years old to seven years later, the surroundings have changed, there are thousands of people watching, but you’re still playing together. It’s very special to be out there with one of my best buds.”

Breen and Percillier both grew up in Mill Bay and got their starts in the sport with the Cowichan Rugby Football Club. Breen went to Shawnigan Lake School and Percillier attended Brentwood College School, but they both ended up at the University of British Columbia and in the national program. They were among several players given the chance to shine as the 2021 World Rugby Sevens Series made stops in Vancouver on Sept. 18 and 19 and Edmonton on Sept. 25 and 26.

While they didn’t have time during the intense matches to think about their respective journeys, they were definitely able to pause and reflect later.

“It’s one of those things,” Percillier said. “You get swept up in the moment. You focus so much on this thing in front of you. You notice those things about it afterwards.”

Both players made impacts for the national team. In Vancouver, where Canada placed sixth, Percillier came in as a sub and scored the game-winning try in a 19-14 victory over Chile, then started and scored again in a 29-19 loss to the U.S. They both started and Breen scored in a 33-19 playoff win over Spain.

Percillier started all six games in Edmonton, where Canada finished fourth, losing to Kenya in the bronze-medal match. Both players started and came up big for Canada in a pool match against Mexico, Breen scoring twice and Percillier kicking four conversions.

“It started off pretty well at B.C. Place,” Percillier said. “And a fourth-place finish [in Edmonton] is nothing to sniff about, especially for a young team like ours. We gave it all in our last game against Kenya.”

After a few of Canada’s stalwarts retired following the 2020 Olympics in Tokyo, Rugby Canada is looking to youngsters like Breen and Percillier as the future of the sevens side, and they are embracing that opportunity.

“Matt and I have played together since Grade 8, and [Victoria’s] Jack Carson has played against us since around that time,” Breen said. “There are a couple of older guys who have played together for ages. This was the merging of those age groups. We’ve gotten pretty close over these tournaments.”

With the 2021 Sevens Series over, Percillier is going back to UBC, while Breen will head to France to resume his pro career with US Carcassonne of Rugby Pro D2 as soon as he gets his visa sorted out. Depending on how things play out, both players could be back with the national team when the 2022 Sevens Series kicks off in Dubai in November.

For now, they are basking in the glory of their senior national team debuts.

“It was surreal; everything kind of coming to that point you’ve worked so hard for,” Breen said. “It’s gratifying. You work for something, you finally get it, you’ve reached your goal; where do you go from here?”

“Some of the guys I was putting the ball into the scrum next to were guys I’ve been watching for years, taking a peek at my phone during class,” Percillier added. “You’re seeing them, tackling them, them tackling you. It’s pretty cliché, but dreams do come true.”

It’s not stopping there, though.

“You hit one dream and make another one,” Percillier said.