Cowichan Rugby mourns the loss of a great man.  A man who was many things to many people, but to us, always a Piggie.

Some of Andy’s many accomplishments in the Cowichan Valley:

Andy was a constant presence at the Cowichan Rugby Club from the 1960s till 2020 (check out the photos below).

Andy played rugby from the moment he arrived with his family in the Cowichan Valley at Cowichan High School, and the club levels from juniors, men’s first’s, thirds, over 35s, and finishing up with the over ‘40’s.

During the building years of the facility, there was only one electrician – Andy.  He did all the wiring/electrical work at 1860 Herd Road.  (I’m sure most places in the area have had Andy in their electrical boxes).  He worked behind the scenes at Piggie Park for so many years.  His work at the club laid the foundation for our amazing facility.

After his playing days, you always found Andy supporting all the club teams on the sidelines. And always have a social beer, and a chat.

Andy loved rugby, and rugby loved him.  There are not enough words, or photos to honour such an enormously great man.  We thank him for his lifelong dedication to the sport, our facility, and our membership.

As President, I thank him for blessing the club with his presence. As a friend, my tears are from my heart, I just plain loved him.  We all did.

Andy is survived by his wife Kathleen, daughters Andrea and Jodi.  Sons-in-law Clint and Martin, grandchildren Alex, Sydney, Emily and Ryan and great granddaughter Olive, his many siblings, their spouses, many nieces and nephews. 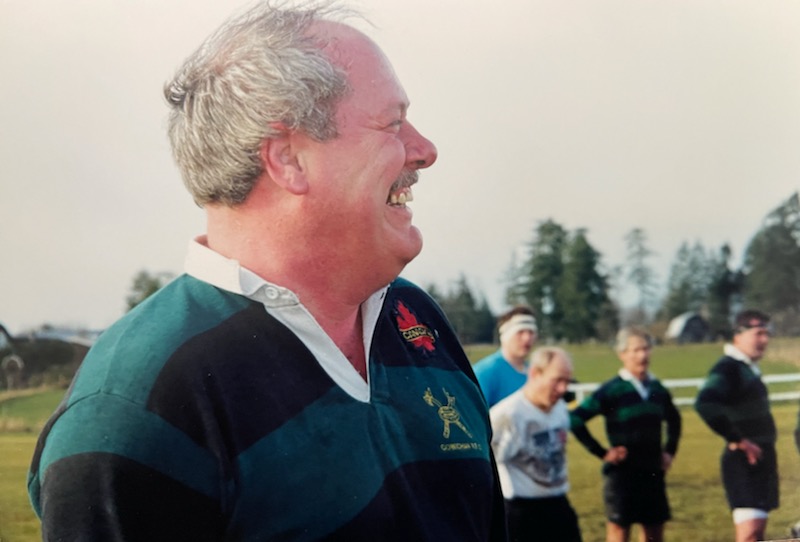